Reus, the dutch word for “giant”, is a fitting name for the “god-game” or “god-simulator” Reus.  Reus puts the player in charge of four giants who terraforms the world and adds resources to the lands. Soon enough the humans come to settle a village and constantly complain about stuff, it is so realistic in that sense! Reus was previously released on PC back in 2013 and now it’s the consoles' time to get a taste of how it is to be god.

On the surface, Reus looks like a simple game with a cute art style set on a 2D spherical world, but it has a lot of depth to it. Deciding on what biome to create, what resources to place where, what “Symbioses” (resources placed next to each other) to make, what “Transmutations” (evolutions of resources) to go for, and a lot more. Balancing several villages and village projects can become quite stressful in what otherwise looks like a cute and simple game. Too many wrong moves and the little humans start doing what they do the best, they go to war.

The balance of the world is in the player’s hands and they have either 30, 60, or 120 minutes to balance the world. Reus can quickly go from being fun and chill to stressful and nerve wracking. There is a lot to learn and a lot to do in Reus. 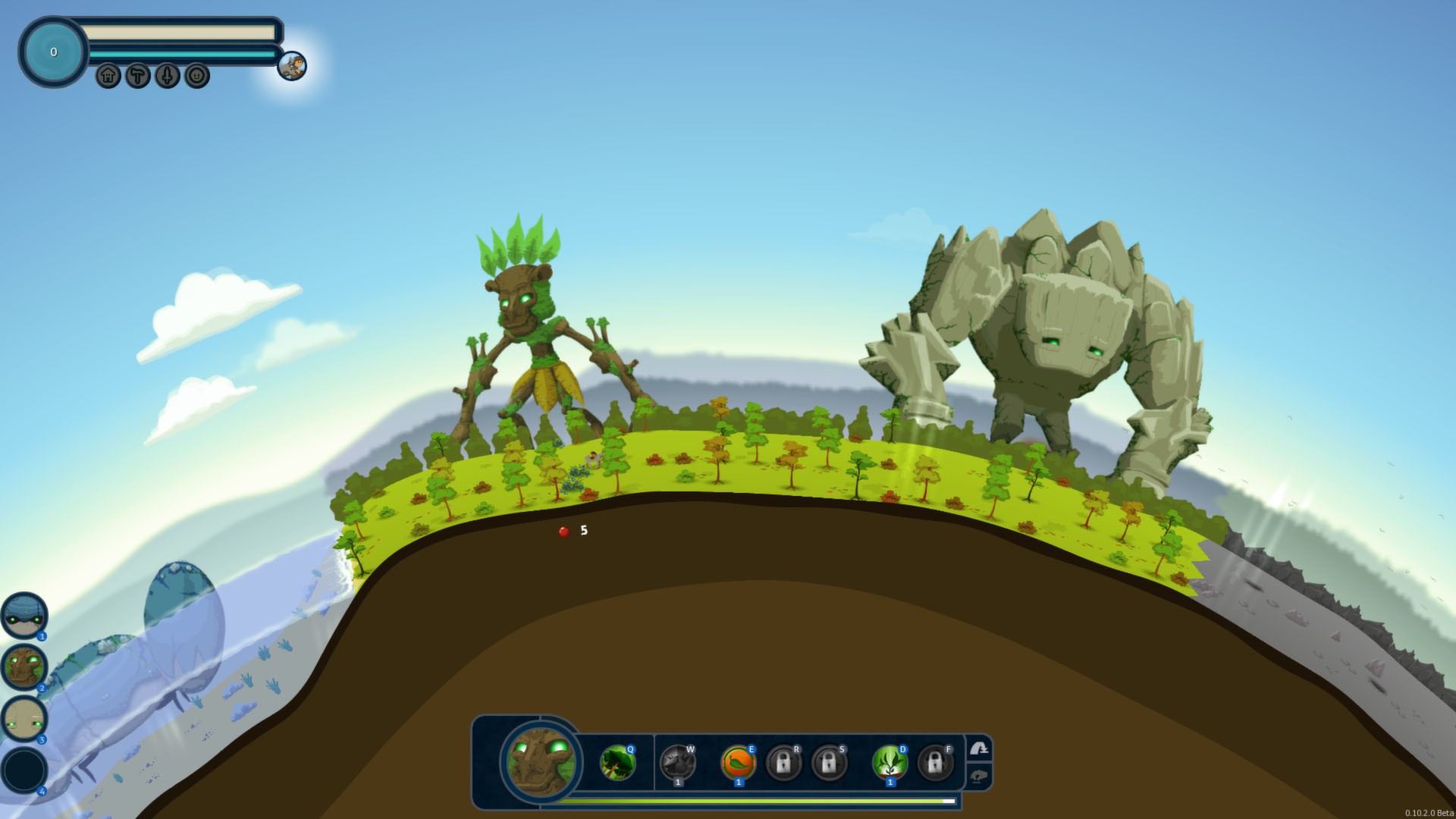 So much strategy in such a tiny space

The world of Reus is not the biggest but Abbey Games manages to cram in a whole lot of strategy in it. In fact, there is so much strategy in such a small area that Reus becomes hard to master, it’s a juggling act.

When you first start Reus it looks quite simple, four giants to control with different powers which you combine for different effects, then you make biomes and provide for your villagers. Sounds easy, right? Wrong! The first few steps are quite easy, make a water source, make a forest, swamp, or desert biome, plant some resources. That’s where the easy part stops. Figuring out what symbiosis works best at this very moment, what transmutations to go for, and balancing greed and village projects is a whole science in itself and shows the depth Reus has. Though this might seem simple, like those alchemy games that were popular on smartphones a while ago, but the different combos and transmutations makes Reus deeper than any of those games.

To get villagers you have to plant one of three resources, Wealth, Food, or Science. Once they move in they start a project which requires that a certain number of resources are gathered and these projects are on random rotation which means that you suddenly have to change a whole lot of resources to be able to finish the current project in time. Managing one sometimes feels like a challenge so managing three or even five at a time can quickly become overwhelming if you don’t know what you are doing. To add to everything the game has a time limit, 30, 60, or 120 minutes, so you don’t have an eternity to make everything you want to either.

This all just adds to the satisfaction when you do manage to finish a project just in time. Mess up a transmutation or a symbiosis and you risk the whole project. Give them too much and the humans start getting greedy and go to war. Reus is a well executed delicate balancing act and keeps you on your toes. Don’t let the cute art style and chill music fool you, you definitely need to get your strategic mind online to be able to master this game. 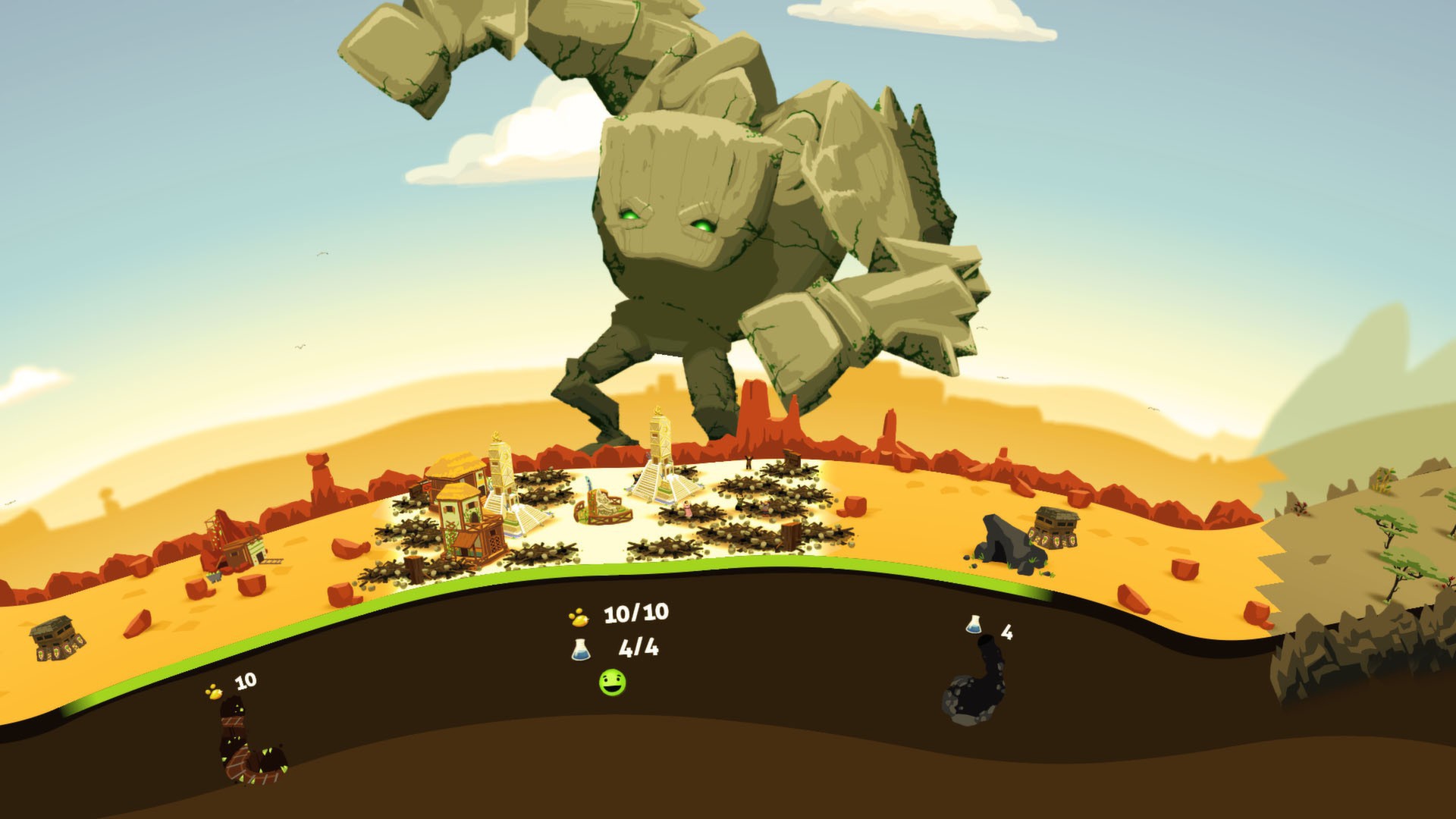 Unfortunately, Reus didn’t feel as accessible as it probably should have. I play a fair amount of strategy games, but still had troubles wrapping my head around it, something felt off for me. The tutorial was good, it showed the basics, but not the rest you need to know to be able to succeed.

One of the features in Reus which makes the replay value higher is that you have to complete a certain number of in-game goals to unlock the next level of content, so first you need to get eight unlocks on the 30-minute mode and so on. That’s fair, considering that most FPS games are hiding the good guns behind level walls as well, but getting there is hard.

Reus mostly tosses you right in there, the system with Symbioses and Transmutations is explained quickly, and now you have to try and reach certain goals and you quickly realize that 30 minutes in not a lot of time. In the end, I had to check out some other reviews, let’s plays, and the online wiki to be able to get somewhere. For me, the 30-minute mode, which is the one you start with, did not give enough time to figure out what worked with what and it felt like walking into a wall repeatedly. I was stuck for quite some time and did not complete many of the goals and was not able to advance to the next level, it was only after I checked the wiki that I was able to make any real progress.

Once I had gotten the hang of all the tiny game changing mechanics I started to really enjoy the game, but the learning curve felt a bit too steep. Many of my early games felt pointless like I was fumbling in the dark. Once you get past the first few steps Reus becomes quite fun to play and the strategy really shines, but getting past them was not fun. 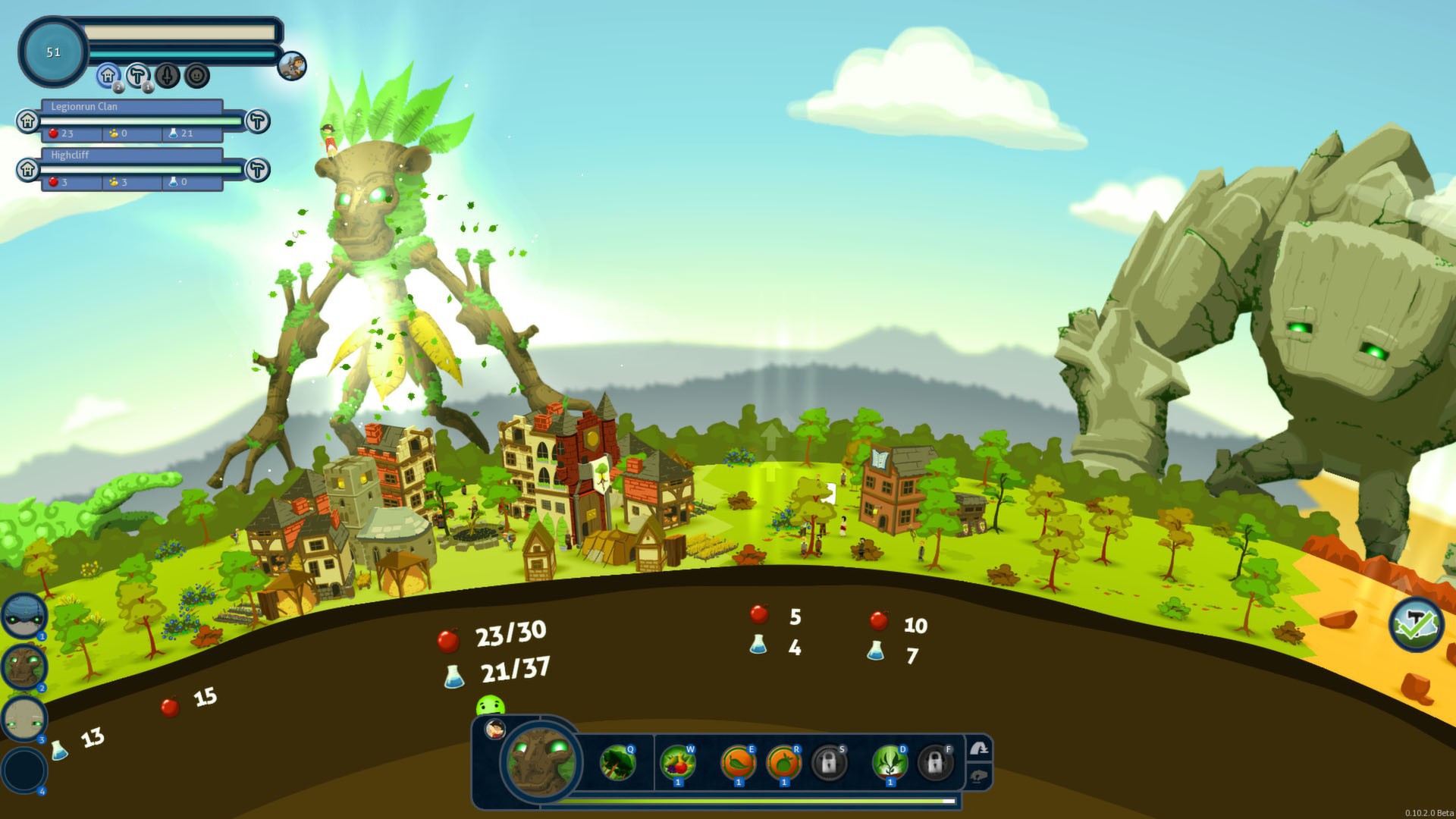 We all know the story, a game can be really great on one platform but the port on another platform plays like garbage or is just outright unplayable, like Arkham Knight on PC was. Reus is NOT one of those games, Reus is a great console port which feels well, looks well, and plays well.

The reason not too many PC strategy games has made the leap onto consoles is because strategy often times don’t play well on any other platform than PC, there are some exceptions but as a standard strategy works best on PC. Players can really feel that developers Abbey Games have put a lot of time and thought into making Reus not just feel like a port but like a game developed for the platform it is being played on, and they have succeeded.

Like the CEO of Fatshark said when developing Vermintide for consoles “We don’t want to make a port! That’s the most important thing for us not to do; It’s not supposed to feel like a port where we cut corners,” and the people over at Abbey Games seems to have a similar opinion because you won’t feel like Reus was made for PC and then ported, it feels like the game was made for the platform you are playing it on. Sure the controls are not as free or great as you might want but it’s the only possible way to have them without making it feel weird, they still play well.

The only thing to complain about when talking about Reus being a PC to console port is the pricing, as of now Reus can be bought for $24.99 on Xbox On,e but it’s also available on PC for $9.99, the price difference is about 150 percent. It seems a bit odd to have such big differences in price for the same game. That begs the question if Reus on console is 150 percent better here than on PC, I doubt that. It just feels weird that the price difference that big. 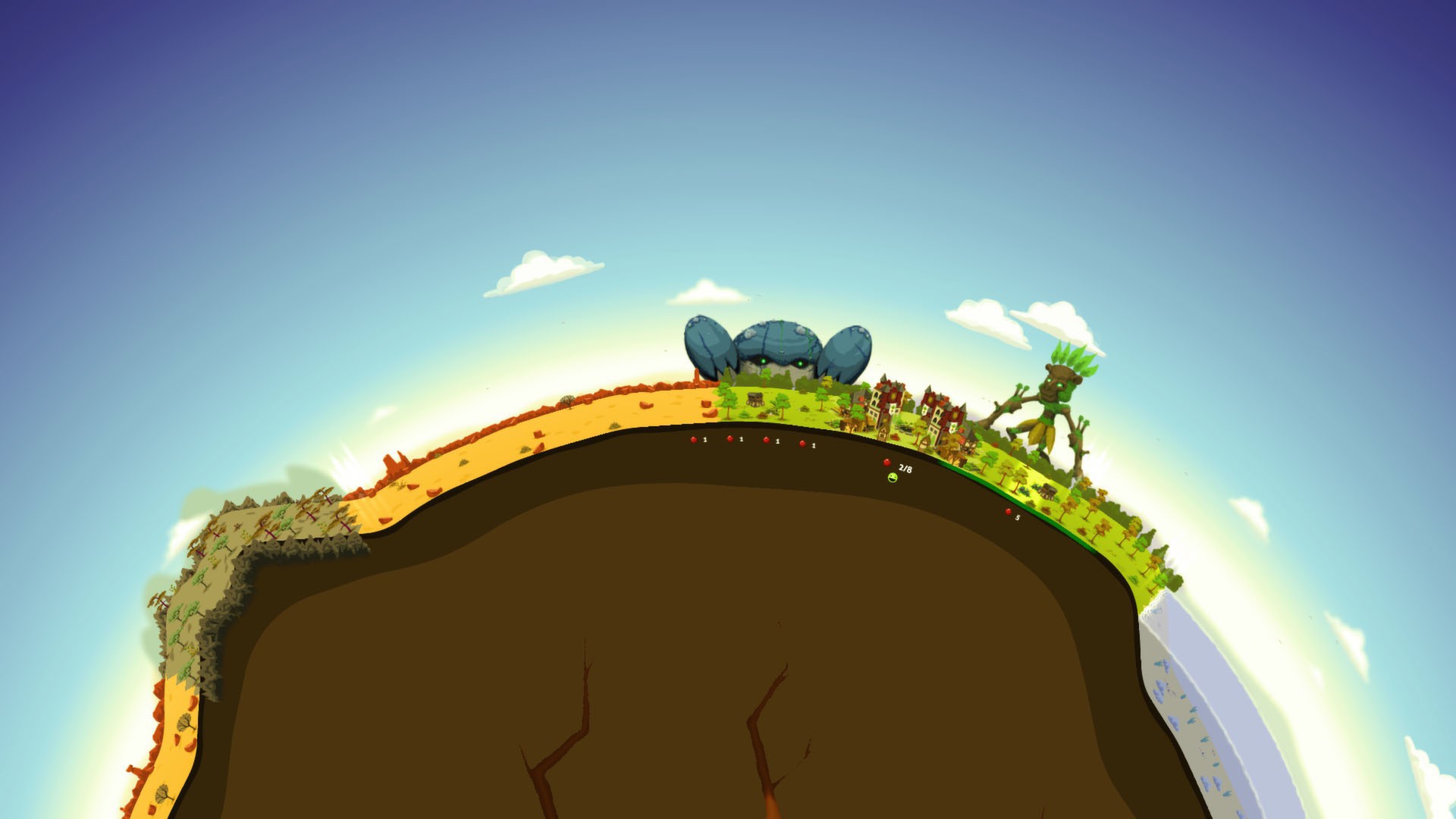 Reus does something quite impressive, it manages to cater to most strategy fans as well as gamers in general. While Reus can be a bit tough to learn and master it can be quite a relaxed game to play. Abbey Games manages to mix simplicity with complexity meaning that it is strategic enough for most strategy fans to get lost in the game while simple enough for more casual gamers to be able to enjoy it. It’s hard to get this kind of balance right but it feels really great in Reus.

The two major issue with Reus is the high price and the learning curve, for a while players might feel like they are fumbling in the dark, but when they learn the game or take a look at the Wiki it becomes really fun and they can see what they are doing right and what they are doing wrong. Otherwise, it is a great game which will keep players playing for a long time with its high replay value gameplay.

Basically, Reus is a game you can pick up, play for 30 minutes and then be done. It has a lot to offer and suits most gamers, it’s a simple and well-executed game and players won’t feel that this was originally a PC game.

Review: Doom Eternal is a relentless rush of frenetic chaos

Review: MLB The Show 20 is great despite not swinging for the fences

Review: Dreams is an endless gallery of pure imagination

New Resident Evil 3 trailer is all about the heroine Jill...

Sakura Wars showcases intricacies of its combat in new trailer