Strategy games, though few and far between in comparison to military shooters and role-playing games, have always been beloved by the gaming community. When crafted carefully, with a thrilling story, strategy games can be enthralling, introducing you to an entirely new perspective on certain situations. One would imagine then, that a story that pits rival factions scourging the far ends of the universe for potable water (water that has recently run dry) against one another would be engaging, but unfortunately, Carrier Command Gaea Mission misses its primary mission that it aims to conquer. Is it still a valuable time investment for fans of strategy games?

If Carrier Command Gaea Mission has one thing going for it, which may be its only positive light, it’s that it features variety in every form. From every piece of land, whether it be tropical, tundra, or mountain, to vehicles that fire cannons, machine gun bullets, and perform specific mission-related tasks, you’ll never feel that you’re be forced into doing the same activities. Unfortunately, an abysmal, almost laughable AI kills this variety, and stabs the heart of this promising strategy title. 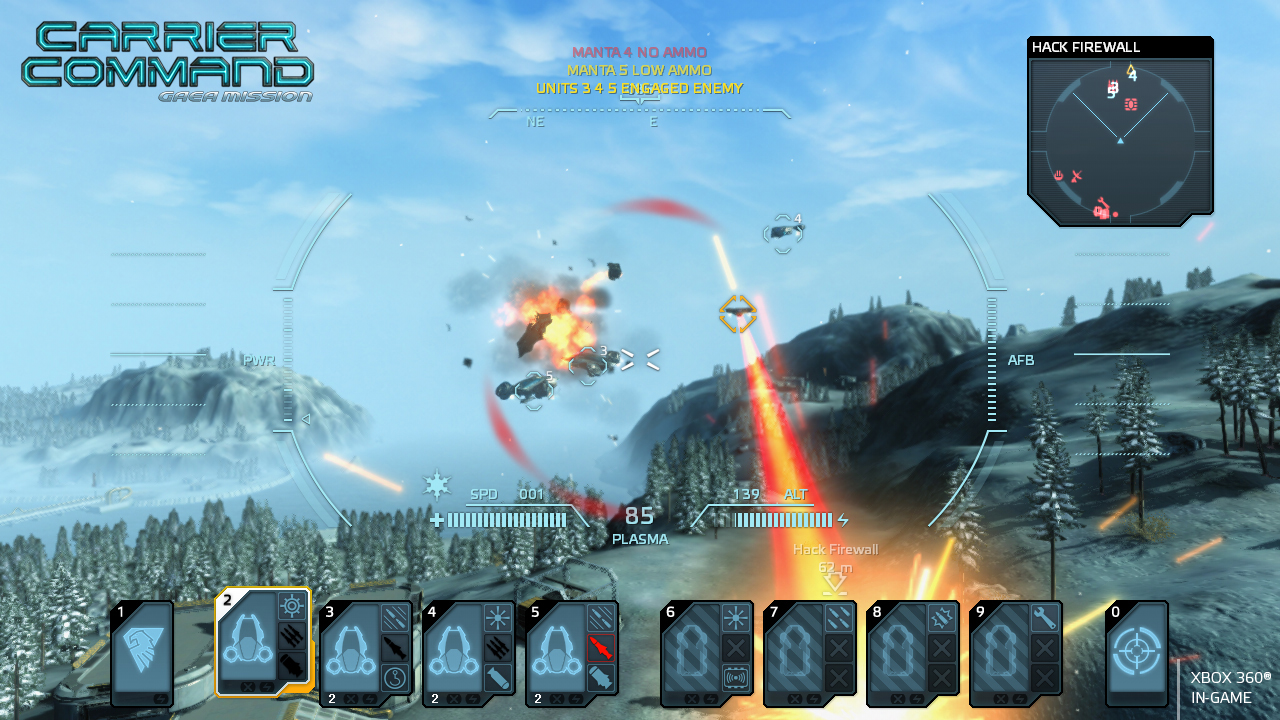 As I just alluded to, Carrier Command’s AI is incredibly unintelligent. The game’s user interface, which actually works quite well, allows you send off troops and vehicles anywhere on an island so that you can conquer strongholds for your faction. As you dispatch your squads, you'll have the free-will to oversee the entire option through your main interface and/or go directly into battle with any troop member or vehicle, both ground and air.

This aspect of the game is vital to task completion which always has you destroying or capturing key points, though your path to doing so will vary, such as destroying barriers, overtaking factories, and com stations. Sadly, accomplishing these tasks are a headache in and of themsevles, as foot infantry and vehicles will often become stuck in the landscape and will often become lodged between buildings; and this is both third person and first person controlling, as vehicle controls are loose and poor for such needy directness.

Worse, though, is the game’s path finding, specifically after receiving orders. Command does a poor job of detailing just how to carry out a specific task and why you’re doing it all in the first place. It’s one thing to struggle with mission sequences because of rotten directions, but when you’re clueless as to the bigger picture, your interest begins to wear off during this lengthy campaign.

And for a full-fledged $60 release, Carrier Command looks mediocre at best. Indeed, some XBLA titles present better graphics than this title, which is frustrating because Bohemia could have enhanced the experience immensely simply by implementing gorgeous backdrops and landmasses. Instead, we’re stuck with terrain that looks like a clutter of boxes jumbled together, or rocks that look like a child had fortified them with Play-doh. It’s not an ugly game by any means, especially in the strategy genre, it’s just not something that seems to be pushing this generation’s limits, which is something we’ve come to expect this far along in the console life cycles.

With so much promise that extends from a decent premise and a wide array of toys, Carrier Command Gaea Mission fails on almost every level. If we had to narrow our experience with the game down into one word, it would undoubtedly be frustration, and that’s not a good taste to be left with.

With poorly developed AI, outdated graphics, and unclear directions, strategy genre enthusiasts will not even find much worth with the title, so we’d advice you to take your carrier and fleet somewhere else.

Tom Holland shows us his Nathan Drake in the Uncharted movie

Hideo Kojima has begun production on his next game

Cyberpunk 2077 devs are getting Death Threats after newest delay

No Man’s Sky: Next Generation free upgrade is a game-changer