The foundation was set in 2014, when Watch Dogs first released, and the game proved to be a massive success for Ubisoft, it scraped by as a solid experience on next-gen consoles.

Set in an impressive recreation of Chicago, the player took control of Aiden Pierce, an expert hacker seeking revenge for the death of his family. The plot was serviceable if a little vacant, and the gameplay showed promise but was not fully realized. It was simply fine, but 'fine' wasn’t good enough for a game that had such an impressive first showing years prior to its release. This was meant to be the first installment in Ubisoft’s next major IP, and whilst its release wasn’t necessarily a whimper it was also a far cry from a bang. The game would go on to sell millions of copies, but players couldn’t help feel a little letdown.

We spent some time with the sequel, Watch Dogs 2, and what we experienced seemed to be an answer to those fans’ desires.

The Senior Editor of GameZone, Tatiana Morris, and I flew out to San Francisco for this experience, which just so happened to be the location of Watch Dogs 2. We booted up the game literal blocks from the studio we sat down to play it in and got a brief overview from a developer on all the tools and controls we had at our disposal as the game’s protagonist Marcus Holloway.

Let’s get this out of the way: I was awestruck at the attention to detail the creators had put into recreating San Francisco. Comparing the in-game map to the real life map on our phones, we found that whilst the play area had been slightly compressed there was an impressive amount of the city actually explorable in the game. Much like Watch Dogs, the sequel’s most impressive feat will prove to be its world. Although this time, its a lot more colorful and vibrant than the dreary and drab Chicago. 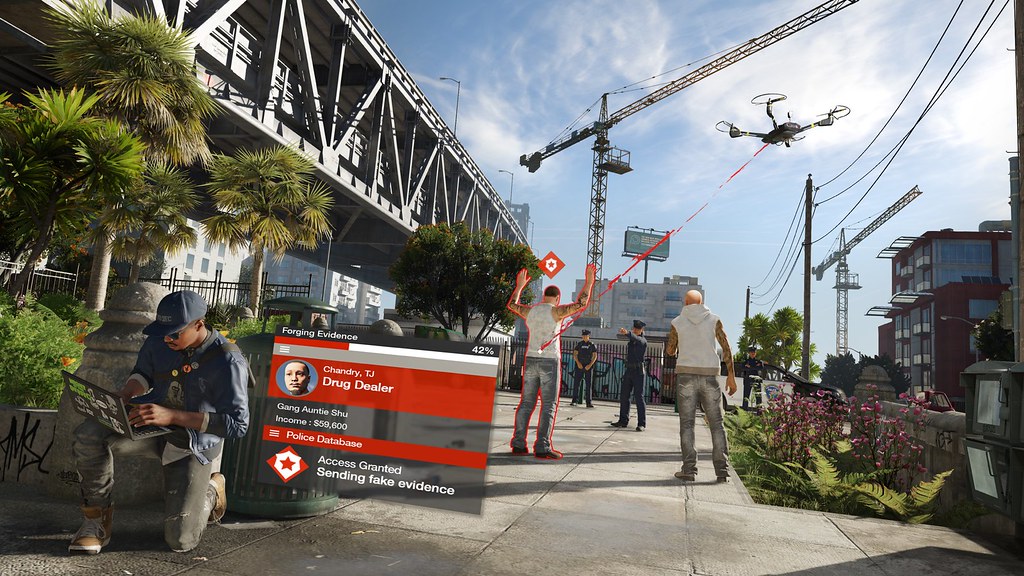 It was clear that the biggest problem the original game had, an uninventive hacking system, was being addressed this time around. In fact, there was such a wealth of ways to interact and control this world that it was almost overwhelming. Tapping and holding down buttons brought up different menus, and from there the choices available to you changed depending on the context of the situation or item/NPC you were hacking. In Watch Dogs, when I approached a mission area, it was very clear that there was a specific order and rhythm the developers wanted me to tackle the situation. It would be obvious I was meant to hack a specific camera, and from there hack a specific forklift to help climb into the closed off area. A guard would pass by a group of other enemy NPCs, and hacking him would set off the grenade attached to his hip. It was incredibly formulaic, but Watch Dogs 2 throws that all out the window. 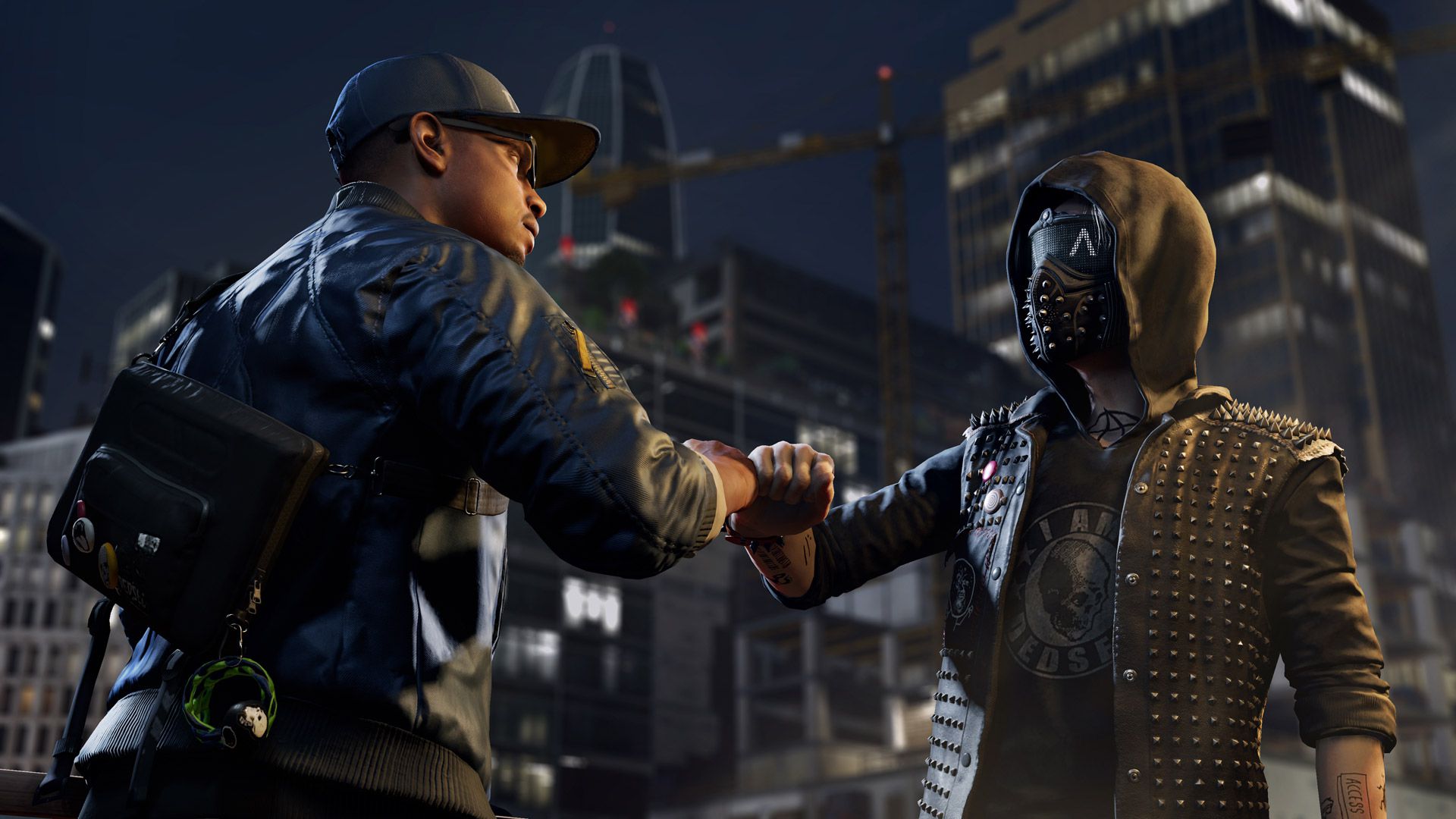 In the mission we played, we were tasked by another member of DedSec, Wrench, to acquire a truck carrying chips that would allow us to hacking into Haum 2.0: an operating system that allowed you to control your house through your phone. As I approached the dock where the truck was located, that feeling of being funneled into a certain hacking path was gone. I literally didn’t know where to begin, which resulted in a lot of experimentation and an awful lot of dying. I was frustrated, but I couldn’t complain as the developers had clearly gone to extreme lengths to give players way more choice than they had the first time around. It was clear that a natural progression in which you slowly acquire these skills, versus being thrust five hours into the story with all the hacks unlocked, would allow the player to more deftly handle this mission. Nevertheless, the new tools were cool to use, especially the drones that allow Marcus to hack remotely.

The dressing of Watch Dogs 2 was perhaps my favorite part of the game, but also was my biggest red flag. Outside Wrench’s garage in which we deliver the Haum 2.0 shipment, the wall is adorned with poster parodying popular memes. The game has two apps, Driver SF and ScoutX, which serve as the portals to starting side missions.

Driver SF is Watch Dogs 2’s take on Uber/Lyft, and has you picking up NPCs all over the city to acquire money and followers. Unlike, Uber and Left, these passengers are going to have you do more than simply ferrying them from one location to the next. ScoutX is the game’s version of Instagram and has Marcus taking selfies at landmarks across San Francisco in order to acquire followers, which translates to XP in the game.

At the DedSec HQ, you’re able to 3D print your weapons and mods. All of these things, mixed in with the jovial nature of Marcus and his cohorts, is I believe a deliberate maneuver away from the more somber and “serious” nature of the original game. It has me worried, however, that the game will not strike a strong balance in tone and will instead be all style and no substance. Grand Theft Auto V, which shares a lot with Watch Dogs 2 in terms of gameplay, is a great example of a game that nails that town. It has a lot of humor but also a lot of heart. I sadly did not experience that heart during my playthrough, but I saw such a tiny sliver of the game that it’s impossible to say whether its missing or I just didn’t get around to it.

Watch Dogs 2 is striving to fix the sins of the past by injecting life and color into its characters and environment, adding a bevy of new ways to hack the city around you, and more tightly integrate the gameplay into the story. Also, the driving is much better this time around! It’s too early to say whether this game will prove to be the game installment fans were hoping for with the original Watch Dogs, but it's clearly a step in the right direction. Time will tell when the game release November 15th.

Preview: Crucible is a solid AAA debut from Amazon Games