Around this very time last year, I wrote a personal, heartfelt, raged-spirited editorial highlighting the atrocity that was the 2011 Video Game Awards. From the countless trailers to the embarrassing tea-bagging scene the industry shall never forget, I couldn’t possibly grasp the idea that the VGA’s were actually an “award show” – a show set out to celebrate a specific year in gaming. That being said, somewhere deep down I pictured a reformation of the entire event, and to my surprise it did just that and so much more. After this year’s two-hour salute to arguably one of the best years in gaming, I sat back and mumbled under my breath, “And that’s why I’m a gamer.”

Last year’s centric problem with the show was identity. It called itself an award show, but acted as a live-action marketing billboard. This year, though, celebration was the nail hit on the head. Not only were there a number of well-scripted, genuinely hilarious shorts from this year’s best titles, but also developers were spotlighted for their work. – for their hours of input that was eventually boxed and sold for our eyes to gaze upon. One moment that’s been stuck in my head was Master Chief’s reaction to be selected as “Character of the Year.” It started as the Chief we’ve come to know and love – serious and set on not receiving recognition for his work – but then shifted to a star struck, prima donna Chief because of his chance to see Samuel L. Jackson. Even though it wasn’t an award, this bit was a celebration of Halo – of 343’s success.

Speaking of Samuel L. Jackson, can’t we agree that he’s a great fit for the show? Sure there were unneeded explicits, but his personality resonated beautifully with the show’s identity. Jackson’s jokes were actually funny, and I think we all can agree that you can’t say that with many other award shows. In addition, his serious love for games was presented with every bit of dialogue from start to finish. To be honest, I couldn’t tell if he was even reading from a teleprompter or just being Samuel L.’freaking Jackson, and that’s exactly what this type of show needs. When you throw people onstage who really don’t belong at an event like this, it goes south drastically. I believe Jackson was given a lot of freedom and in response to that the crowd responded positively and made for an authentic experience that could be felt even on my couch at home.

Coming into this year’s spectacle, the biggest uncertainty for me was the way the event would present its trailers. The last few years we’ve had dozens upon dozens of trailers that were clogged together. To my surprise, VGA’s 2012 only included a handful of trailers, and boy were they satisfying. One was a highly mysterious new IP, one a brutal looking sequel, and another a fan-crazy prequel. In a nutshell the trailers had it all. We were also thrown a curve ball with some in-game footage of BioShock: Infinite. Oh, and did I mention that the addition of a live orchestra was incredible? This crucial portion of the show was unpredictable, fun, and filled with “holy cow” moments that I’m still trying to grasp. And should I not forget, there wasn’t any crappy, distracting augmented reality this time around. For that alone, I salute the VGA committee. 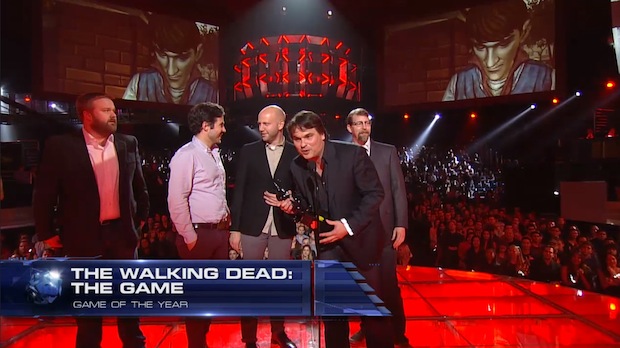 Up to now, I think one aspect you can grasp from this editorial is that the show was paced remarkably. This alone, I believe, made the show. Spacing allowed the awards to build momentum, thus adding more and more speculation for each category’s winner. The “Game of the Decade” award was one example of this. We were teased with it before and into the show, but then distracted from it by the show’s other activities. When time came for the announcement, people were genuinely anticipating the winner. I was even caught biting my nails mumbling, “Red Dead, Red Dead, RED DEAD!” And lets not forget the “Game of the Year” award. Maybe it was the knowledge beforehand that a juggernaut could be dethroned by a downloadable title, and I’m sure that had a part in it, but I think the show’s decision to almost forget the award’s existence made the inevitable reveal so thrilling.

Sitting back, there are some other “obsolete” aspects that made this year’s show different, yet fun, including the ability for TV viewers to actually play a part in the show with interactive polls, but I keep coming back to the word “celebration.” The 2012 Video Game Awards were a celebration for this year’s games, for their developers, and for the entire industry – an industry that’s growing more so every day. “And that’s why I’m a gamer” was my response as the curtain closed Friday evening, but in my mind, I was already anticipating VGA’s 2013, and that alone is a something worth celebrating.

You can follow Tate Steinlage’s every day life of college, Sporting KC, and yes…gaming on Twitter @SteinlageT Ghost of Tsushima guide: 5 tips for being the best samurai

What Sucker Punch recommends you watch/play before Ghost of Tsushima Spoilercast: The Last of Us Part II