A recent interview with Metal Gear composer and singer Rika Muranaka has revealed that Konami axed Metal Gear creator Hideo Kojima from his Executive position at the company (and any other position in the company) because his need to create the best game possible was too expensive.

This information is according to Clayton Daley from Fragged Nation, who was a part of the three way interview on Metal Gear Central. Daley took his information from the interview to another platform on YouTube, The Codec (another three panel discussion), to go into further detail on the break-up.

In the initial interview Muranaka revealed that working with Hideo Kojima was no simple task. Kojima would pay her to write so many songs, only to have the songs turned down time after time. In Muranaka's opinion, Konami was fed up with Kojima frivolously spending money on things that weren't used and pushing the game back, while spending money.

Daley: The main reason for the falling out, at least in her opinion, is that Kojima gets paid a salary, and doesn't make any profit share on the game. He gets paid a certain amount no matter what, and he was spending so much money and delaying the project, and adding all these features and making sure the game was the biggest and best thing it could be, and Konami was unhappy with that because [delaying] has no effect on him. He was spending the budget on this and that and upgrading the Fox Engine and then delaying further because the engine wasn't ready, and Konami wasn't happy with that because he gets his salary and he takes a more traditional "Japanese man" approach by not taking a profit share. So in doing that, he gets a little more than a game creator would but doesn't take bonuses from the game selling well.


Yong: So you're telling me that Kojima wanting to make the game the best it can be is what started the conflict?

Daley: Yes. In her eyes, Kojima's a fantastic creator, and probably the best creator of his time, but he doesn't have a strong business sense like Konami would like him to have. Where instead of, for example, cutting corners by lowering foliage resolution, he wants to make sure everything looks as good and polished as possible. She said they paid for her to write 30-40 songs that ended up not being used, and he'd tell her to write another one, then another one, then another one, because he settles for what he likes and has a good mind for what people want to see and what people want to hear. (Amen on that, yo: Avirdi's personal addition).

Daley: She's worked directly with Kojima for the music before so she does have some insight, and personally believes that the music has suffered in MGSV because she's not a part of it, because they couldn't afford her. So instead of paying her to go to all these people and recruit them for the music, they chose to remove her from the equation and go to the people directly. 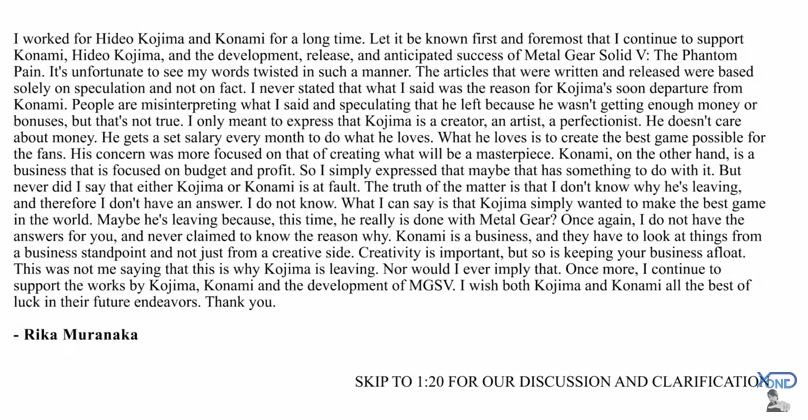 As well as a follow-up from The Codec.