Riot Games, the developer and publisher of hit PC moba game League of Legends, has made some interesting moves over the past week relating to a domain name related to Project 425.

According to Fusible, domain name Project425.com was privately registered through the registrar Melbourne IT sometime in the mid-2000s; however, it wasn't until November 2008 that it was uncovered via the Whois record that Riot Games President Mark Merrill was the domain name's owner.

Every year Merrill continued to renew the domain name, but this past week it was transferred to the internet brand protection company MarkMonitor and, instead of being renewed on an annual basis, was renewed through March 2015. A copy of the Whois record clearly shows Riot Games as the owner. 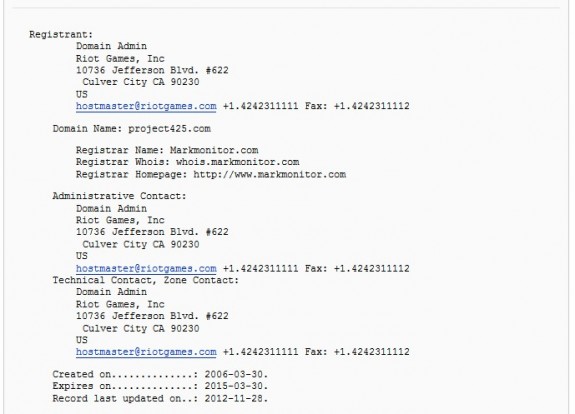 Currently the secret of Project 425 is hidden behind a password-protected website which is interesting considering many of the other Riot Games' owned domain names, such as InstituteofWar.org and onslaughtgame.net, don't point to any location.As it is now, League of Legends is the most played game in the world, but you don't stay on top by being content. Could Project 425 be the future for Riot Games?

It should also be noted that in April 2012 it was discovered that Riot Games also registered several domain names for related to League of Legends Supremacy. As a senior LoL community member pointed out, Riot Games owns several seemingly random domain names, so I will remind you, that Project 425 is nothing more than speculation at this point.