For those unfamiliar, in the Mass Effect series, and most BioWare games for that matter, your course of action often determines your reputation across the galaxy.  The more powerful your reputation, the more willing characters will be to actually listen to you – providing you with extra dialog options that otherwise wouldn't be available, usually with better results than the normal options.

Unlike previous Mass Effect games, no matter what your decisions in Mass Effect 3, you will ultimately be fighting to save the world.  And for that reason, you are never going to be a villain in Mass Effect 3.

"If you take every Renegade option in the game, you may be brusque with your friends and brutal to your enemies; you may make hard choices that cost you friendships; you may have to go to your grave carrying the weight of crimes that would have you reviled as a monster if they ever came to light. But you are always fighting to save the galaxy, no matter what tactics you take."

In Mass Effect 3, you will earn three types of Reputation: Paragon, Renegade, and General Reputation.  As Weekes details, Paragon and Renegade reputation are earned through actions that are always a result of decisions.

"If you only have one way to do something, then doing it increases your reputation in general. So if you want to play as a purely Paragon player without ever getting Renegade points, you can do that."

All reputation earned in the game will show in a single reputation bar.  Paragon Reputation is depicted with a blue bar and Renegade with Red.  General Reputation isn't shown in color, but instead makes the bar get bigger while keeping the same red/blue ratio. 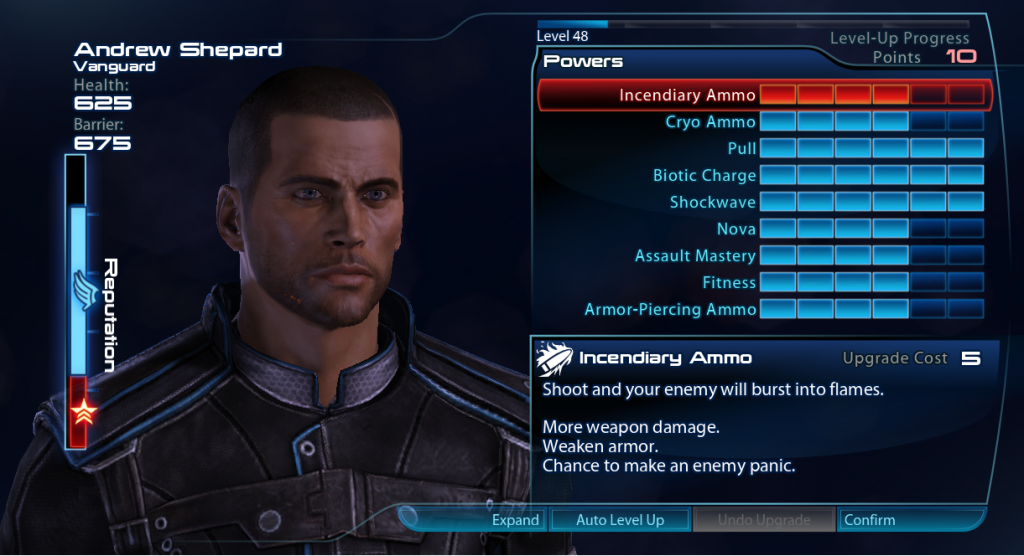 The key differences between Mass Effect 3 and previous Mass Effect games is that there's no penalty for mixing Paragon in Renegade.

Weekes explains, "In Mass Effect 2, if you wanted to get the hardest Charm options, you had to play an almost completely Paragon character. We intended many of those Charms to be fun Easter eggs, but many players felt like they had to play pure Paragon to avoid being penalized by the loss of a dialog option."

"In Mass Effect 3, your Reputation score determines both Charm and Intimidate options, and that score is determined by adding your Paragon and Renegade scores together. You’re still rewarded for being a completionist player and doing as much content as you can, but you can do it as a Paragon or Renegade player without penalty."

This new system also allows players to still become famous and influential around the galaxy, but without the Paragon or Renegade labels.  Whereas in Mass Effect 2, after doing a mission that didn't have major choices players would be rewarded with both Paragon and Renegade points, missions in Mass Effect 3 that don't carry a major decision will reward players with an overall General Reputation score.  The bar on the screen will grow, signifying your gained influence, but the Paragon/Renegade ratio will remain unchanged.

Reputation in Mass Effect 3 will be far more important than using it to squeeze extra reward money or lowering prices.  As Weekes notes, "You'll be banking on your Reputation to save planets and gain alliances, not to get a better deal on snow tires."

"People are already going to be selling you things they wouldn't ordinarily sell, because you're the last hope for the universe," he said.

Before we end, Weekes shared three examples of earning Reputation in Mass Effect 3:

Weekes concluded: "I hope that our new and improved system gives you an intuitive way to see what the galaxy thinks of you. I’m really proud to have worked on a game with so many difficult and morally ambiguous decisions – as our lead designer Preston Watamaniuk said, “This may be the first time I have ever played a game with a morality system and come out morally gray.” I can’t wait to see what your bar ends up looking like. Good luck!"

And in case you were wondering, these reputations and decisions made throughout the game will ultimately effect your game's ending – possibly resulting in an ending that may not be so "cut and dry".  Mass Effect 3's producer, Mike Gamble, revealed, "There are many different endings."

Which one will you get?

Little Hope, the second story of The Dark Pictures Anthology comes this summer

Plague Inc. gets removed from App Store in China due to coronavirus