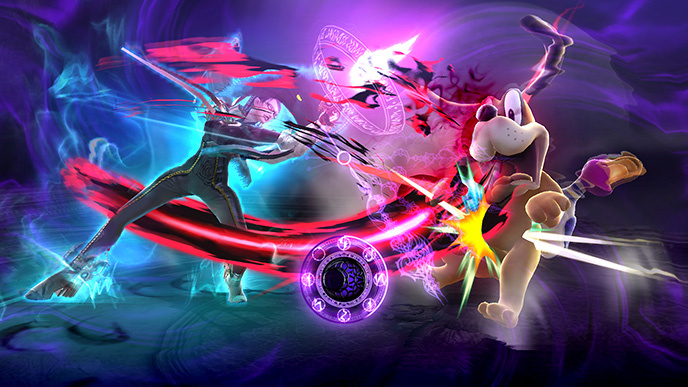 The Spanish Super Smash Bros. community is at a crossroads, are they going to ban Bayonetta or not? It's a big decision for the competitive scene.

Bayonetta is one of the newest characters for Super Smash Bros. and most of us wouldn't really notice if a character is too powerful or broken. Most of us like to just play it and have a good time, but in the competitive scene where players play for hours and learn every single detail a broken character can ruin everything.

The Super Smash Bros. community in Spain thinks that Bayonetta is too powerful and that she ruins the competitive scene, or at least a majority does. There are serious talks about banning Bayonetta because her move set and fighting style is too powerful. Players that used to be top 50 can now beat top 6 players at tournaments thanks to her combo moves.

A vote has been held in Spain and a majority is for the ban of Bayonetta, only 7 percent is against the ban of her. Though there is still a lot of debate going on whether or not it is the right choice to ban her. After all, she released recently and if she really is too powerful a patch will come out soon and fix it. Others are saying that banning her in Spain will hurt the Spanish players on the international scene where she is very much unbanned. Then there are those who says that sore losers are complaining because they can't figure out how be beat Bayonetta and just wants to ban her.

The arguments both for and against the ban are many and long. The ban is not yet in place but a majority of players in Spain are for it and preparations for banning her are well on their way.

If you are a competitive Super Smash Bros. player from Spain and want to keep Bayonetta, speak up now or forever hold your silence.

Destruction-Sandbox Teardown is the next proper indie smash-hit

Far Cry 6 gets delayed; Will release before March 2022

GTA Online gets Halloween update with a UFO in San Andreas

Destruction-Sandbox Teardown is the next proper indie smash-hit